Pole Kiss [noun]: a cuter term for a bruise one receives from pole dancing due to the skin to metal contact.

One of the things you learn early on as a pole dancer is that you will get bruised. No matter how tough you think you are, pole kisses will strike your delicate skin. Don’t worry though. This is a completely normal process and all part of that adventurous pole journey we chose to partake in. For newbie polers, here are some things I’ve picked up along the way. And as for the well seasoned, I’m sure you’ll all laugh and agree.

If you’re a glass-half-full type – they look like a cool little leopard pattern. Otherwise it looks like you’ve been infected with some weird skin disease if you lean more glass-half-empty. I, for one, have never sported such crazy looking bruises until I started pole. I never realized the range of shapes and colors bruises could come in. For those who hate bearing bruises, people have recommended Arnica to me, but I’ve always been too lazy too put that stuff on. 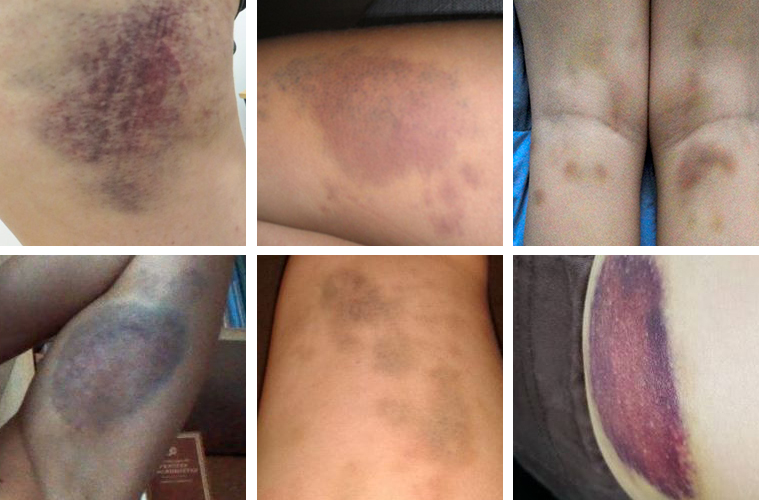 Bruise collection from searching the interwebs.

If I’m sporting my pole kisses out in the open my friends will always gasp, “Omg. What happened? Are you okay?”. I respond it’s just from pole because otherwise they’ll think I’ve gotten a major hickey or I have some concerning domestic abuse situation going on.

The bruising will get better!

Yes it’s true! Overtime, your skin will toughen up in spots if you are routinely practicing in the same spots over and over. Remember when you first began and simply learning a climb resulted in the death of your feet and shins? Now when I climb, I come out bruise free! If you don’t practice certain areas frequently and get that body part used to the metal contact, you will bruise – that happened when I got back into leg hangs…eek.

They may look a lot worse than they actually feel.

If you’re a noobie to pole and have been seeing all those crazy pole kisses people have been posting, don’t run away in fear! The bruising actually looks a lot worse than they actually feel. I get more pain when I accidentally run into a table leg than from pole…

The bruising can be mysterious.

Sometimes you won’t know where your pole kisses came from. Like how did I get a bruise on here, I don’t remember doing any moves in that area. It can cause some confusion, but well I guess that’s okay. One thing I learned being in the pole world is nobody really feels negatively towards pole kisses. Rather we are all pretty proud of our battle wounds. We’re like sticker collectors showing off different areas we’ve been marked.